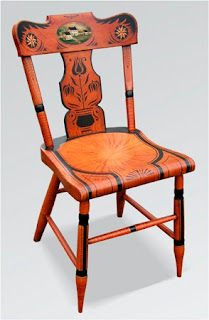 Did you know that most all softwood furniture made in America, such as pine, poplar, basswood, and others, was originally painted? While American furniture was painted from the very beginning of the Pilgrim Period in the 1600’s and through the Victorian Period, it was especially popular from the late 18th century through the 1850’s. A room completely furnished with painted furniture or just a single piece comes alive! Painted furniture offers the ability to completely transform a room setting, creating an absolutely “electric” and magical” atmosphere.

There are basically three main types of American painted furniture.

2. Some furniture was painted to disguise the fact that it was constructed of many different woods, such as American Windsor chairs, which were always painted to present a more unified appearance. For example, the seats of Windsor chairs may be pine or basswood, the legs and stretchers maple or hickory, and the backs of ash or other hard woods.

3. The third type of painting is often referred to as whimsical painting, which was done to brighten up a particular piece of furniture or to perhaps enhance a certain room setting.

This type of painting wasn’t meant to imitate any particular type of wood but rather to reflect the style of “fanciness“that was the hottest fashion in America from the early 1800’s through the 1850’s.

We often paint on antique pieces that would originally have been painted. The original finish “gone” or so diminished that it couldn’t be saved. We rescue these pieces and give them a new life as heirlooms to be handed done to new generations 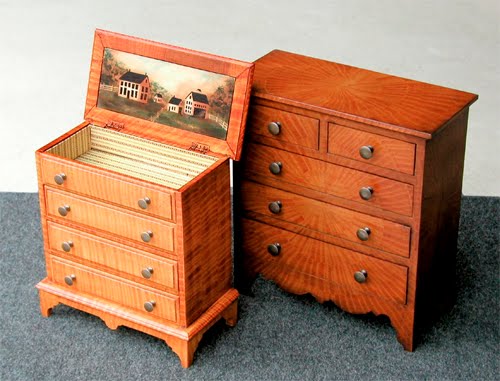